*Disclaimer: I am an NCircle Entertainment Ambassador and received a copy of each of these DVDs, free of charge, for our viewing enjoyment and to host a giveaway on our blog.*

If you and your kids are anything like mine, then you love SHARK WEEK!! So many good shows on that are both entertaining, educational or both!! We make sure to catch it each week.

With thanks to NCircle Entertainment, one of our readers will now have a chance to win their own copies of: Octonauts: Calling All Sharks and Thomas Edison's secret Lab: It's Always Sharkest. 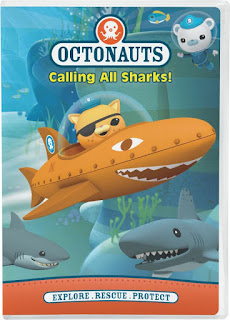 Dive into adventures with your favorite underwater explorers, the Octonauts!  Join brave Captain Barnacles, daredevil ex-pirate Kwazii, and medic Peso Penguin, along with other Octonauts as they explore the world's oceans, rescue the creatures who live there, and protect their habitats above and below the waves!

On this exciting DVD, join the Octonauts aboard the Octopod as they come face to face with a trio of pesky Cookie cutter Sharks, look after an injured Lemon Shark and stop a White tip Shark who is chasing the Gup-A! 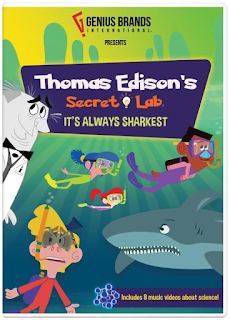 Unknown to the world, Thomas Edison built a secret lab where he invented a virtual version of himself and a steampunk robot named Von Bolt. Years later, Angie, a twelve-year-old science prodigy, discovers the lab.

Join Angie and friends as they learn and explore a variety of science topics from a shark's sense of smell to plants and pollinator's roles to radioactive decay to DNA and more! While visiting one of Kent's relatives, the kids come up with a great idea for attracting more tourists to his restaurant - the only catch is that it also attracts a very big shark with very big teeth! What will the Secret Lab Kids do? Guided by fun-loving Edison, Angie and friends will show just how fun science can be!

If you would love to win these two DVDs, just check out the rafflecopter for below to enter.


Rules for the Giveaway

*Open to residents of the USA 18+
*Please only one entrant per household.
*Please only take credit for tasks you complete on Rafflecopter.
*Giveaway ends August 7, 2018 at 11:59 p.m.
*Winner will have 72 hours to respond with complete address so that I can forward it onto my contact.

**Warner Bros. Home Entertainment provided me with a free copy of the Blu-ray I reviewed in this Blog Post. The opinions I share are my own.”**

What is it about:


Teenager Reagan Willis (Agudong) has one dream – to play soccer like her hero, Alex Morgan. Her bedroom is a shrine to all things Alex, including a life-size poster of the Olympic gold medalist. Yet in the Willis house, Reagan lives in the shadow of her prep football superstar brother, Logan. When Reagan fails to make the cut of the premiere local soccer club team and is humiliated by her rival Claire, she’s certain her ship has sailed. But after accidentally hitting her head, Reagan’s poster of Alex Morgan suddenly comes to life and everything changes!
An Olympic Gold Medalist and FIFA Women’s World Cup champion with a penchant for goal scoring, Alex Morgan is one of the top soccer players on the planet, currently playing forward for the United States Women's National Team and the Orlando Pride of the National Women's Soccer League. Away from the field, Morgan is also an accomplished author of “The Kicks” series, a collection of chapter books filled with wonderful messages of empowerment for young girls. The first The Kicks book, “Saving the Team,” debuted at No. 7 on the New York Times Best Seller list.
Eric Champnella (Thunderstruck, Mr. 3000, Eddie) wrote the Alex & Me screenplay and is also making his full-length feature debut as the film’s director. Alex Morgan serves as co-producer. Producers are Mike Karz (Blended) and William Bindley (Mother’s Day). Todd Williams (The Illusionist) is the executive producer.
Jerry Trainor (iCarly) also stars as Nigel, a less-than-reliable youth soccer coach, alongside Matt Cornett (Bella and the Bulldogs) as Reagan’s brother, Logan; Colin Critchley (Legends of the Hidden Temple) as Reagan’s soccer-playing pal, Ben; Chuiti Tiu (Nashville) as Reagan’s mother, Ann Wills; and Jim Klock (True Detective, Scream Queens) as Reagan’s father (and biggest fan), Joe Wills. Jessica Treska (HBO’s upcoming Sharp Objects) plays Reagan’s arch-rival, Claire.


Our review:
I knew the kiddo would enjoy this movie as soccer is her favorite sport and she also knows who Alex Morgan is.  The movie was very easy to relate to as there are a lot of kids that live in their older siblings shadows when it comes to sports and millions of kids who don't quite "make the cut."
It is a good family movie that everyone enjoyed and the kiddo has watched it twice already.  Would definitely recommend, especially watching it right now with the World Cup in full-force.  Perfect for the soccer fans and also for kids that feel like they don't quite live up to the hype of their older siblings when it comes to sports.
Alex & Me is available on Blu-ray (SRP $24.98), DVD (SRP $19.98) and Digital (SRP $14.99).

Check out the Alex & Me Soccer Emoji Creator and create your own emoji!
﻿

How would you like to win your own copy of Alex & Me? Just check out the rafflecopter entry below to enter.
Good luck!
**Please note: Each household is only eligible to win Alex & Me Blu-ray via blog reviews and giveaways. Only one entrant per mailing address per giveaway. If you have won the same prize on another blog, you will not be eligible to win it again. Winner is subject to eligibility verification.

Rules:
Give is open to residents of the US 18+
Please, only one entrant per household and only take credit for tasks you complete.
No PO Boxes as prize is shipped via FedEx or UPS.
Giveaway will end on: June 29th at 11:59 p.m.
Winner will have 48 hours to respond with mailing address.

**“Warner Bros. Home Entertainment provided me with a free copy of the Blu-ray I reviewed in this Blog Post. The opinions I share are my own.”** 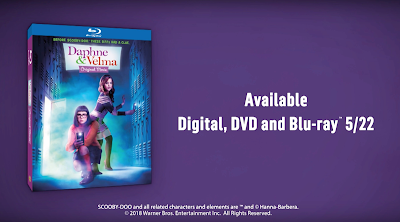 This looks like such a cute, fun, family movie!! Don't you agree??

Check out the Slime Lab video where kids of all ages can learn how to make four different types of slime with the stars from the movie.

Check out the Blu-ray art from the movie!!


How would you like to win your own copy of Daphne & Velma?? Just check out the rafflecopter form below to enter.
**Assets included within this message were provided by Warner Bros. Home Entertainment Group.   We are proudly working with Warner Bros. Home Entertainment!! We will receive a copy of this Blu-ray, free of charge, for our own entertainment.
Good luck!
Rules for Giveaway
*Open to residents of the US  & Canada 18+
*Please only one entrant per household.
*Please make sure you complete all tasks that you take credit for.
*Giveaway will end on 6/8/18 at 11:59 p.m. est (winner will have 48 hours to respond with requested info).
*No PO Boxes allowed as sponsor only ships using Fed Ex or UPS. 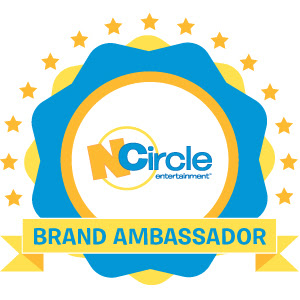